20 Seconds of Courage - Standing Against the Wind 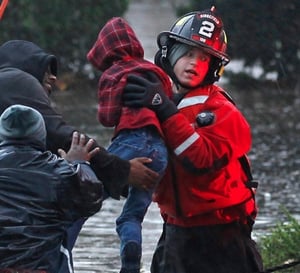 We've all followed the news, especially the amazing stories coming out of New York in the aftermath of Hurricane Sandy last week, and as you can probably imagine I had no trouble finding content for this week's edition of 20 Seconds of Courage. In actuality, the trouble I've had has been in narrowing the list of potential topics down into something that can be saliently covered in 500 words or less, quite a task, I can assure you!

I think it's important this week for our focus to be twofold. First, I want to consider the courage of the first responders, because for them those 20 seconds of courage that are such defining moments for many of us are just part of a normal workday. These are the men and women that regularly run into the burning building, toward the sounds of gunfire, or as we saw recently up and down the eastern seaboard, into the rising flood waters.

These individuals, who would likely tell you they're "just doing their jobs" should serve as a beacon of inspiration for the rest of us. Firemen, EMT's and police officers, along with those serving in the armed forces, face fearsome situations requiring courageous action as often as you or I might brush our teeth. They face their fears and act on behalf of the greater good every day, and in doing so, they make our world a better, safer place. So what lesson can we take from the actions of these heroes? We should be inspired by their bravery, strengthened by their fortitude, and encouraged in our efforts to take courageous action in our own lives. If those firemen can drive through pounding rain, howling wind and rising water to save lives that hang in the balance, can we not then find the courage to speak up in the face of bullying, or do the right thing, even if it isn't the easy thing?

The firemen, EMT's, and the police are regularly recognized for heroic actions in moments of crisis, but they aren't the only heroes who stepped up. We also need to remember the nurses and doctors who bravely stayed at their posts through the storm, putting their responsibility to their patients ahead of worries for themselves and their families. We need to think about the courage of all the families who braved the storms without those Moms and Dads who had a duty to serve elsewhere. Is there inspiration we can take from those who held fast, either at home without someone, or at their job away from their family? Of course there is. Next time it feels like a hurricane is happening in your life, remember that sometime the most courageous thing is just to stand against the wind.