About $350 Billion a Year Lost Due to Unhappy Workers 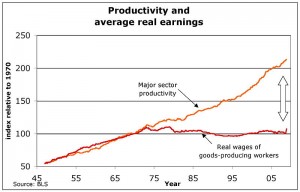 - There are two types of disengaged workers.

- The most disengaged are the least productive.

According to an analysis conducted by the Gallup Organization, disengaged employees cost the American economy up to $350 billion a year due to lost productivity, because they are the lowest performing. To put it simply, if there had been engaged workers in those positions, they could have been far more productive.

For the purpose of the analysis 'actively disengaged' workers were defined as the individuals who are unhappy at work and act out their unhappiness. In other words, the actively disengaged are consistently negative and won't participate in solutions. They also may block the efforts of the engaged happy workers who are much more productive.

As many as 16% of American workers might be actively disengaged, says writer Curt Coffman. (He is a co-author of First, Break All the Rules and Follow this Path. For example, if there are about 111,000,000 nonfarm workers in America, then 16% or 17.7 million of them are actively disengaged.

There is another kind of disengaged worker according to Coffman. These are the ones that are not negative in the workplaces, but are neutral, meaning they don't obstruct good work, but they also don't participate in an enthusiastic and very productive manner. Coffman says about 55% of the workforce fit this definition of disengaged.

Some of the negative effects associated with disengaged workers are:

- Complain so much they undermine the work of their engaged colleagues.
- Produce less, missing deadlines and sales opportunities.
- Take more sick days and are late more often.
- May be more prone to accidents and injuries.

In his book Delivering Happiness, Tony Hsieh wrote about the practice of paying some employees $2,000 to quit Zappos. Though this policy may seem bizarre to some, it very likely winds up saving an organization money by preventing some of the negative outcomes mentioned above. If a very negative employee was allowed to continue acting out over a number of years, the cost to the organization in lost productivity could be much greater than $2,000.