Bringing Culture to your Current Investments

In a previous post, we introduced the Culture Canvas as a tool to assess whether a company has a Minimum Viable Culture to deliver their value proposition exceptionally well. This time, lets turn our attention to the investments that you or your fund have already made and how “Culture” could be a key criteria for portfolio development.

“Our number one priority is company culture. Our whole belief is that if you get the culture right most of the other stuff like delivering great customer service or building a longterm enduring brand will just happen naturally on its own” Tony Hsieh – CEO of Zappos

The number one myth that needs to be dispelled is that Culture is not to be considered until later into the company´s development. Why would anyone talk about Culture when dealing with a two founder startup? Or with a very small team? Many people tell me that Culture should be addressed only after reaching a clear Product-Market fit.

However, I strongly believe that Culture should be addressed from the onset of the idea generation and onwards as a way to clarify the fundamental driving motivation to build the company in the first place and the set of shared values that will guide the decision making process during what will prove to be very uncertain times for everyone – guarantee!

The set of shared values of even the smallest of teams makes up the DNA of the culture to be. As such, it should be clear from the start whether these foundational values will translate into excellence when delivering the company´s intended value proposition.

Also, a strong self-aware foundational Culture paves the road for a smoother path to growth, which is specially critical when growth is exponential. Since strengthening a company Culture is an organic process, one should start early and be prepared.

But performance and growth are not the only arguments for starting early, you can also think of a strong Culture as a sort of insurance policy for disaster recovery. Startup development is a twisty road. If a change of direction is required, a strong team will have a better chance to pivot and change course successfully. Strong Cultures are better able to adapt to change, and you all know that change is the only certainty in a company´s life.

It is hard for company founders to place much attention in Culture since there are so many other “mission critical” problems to solve. Most founders believe they already have an incredible company culture anyways. That could be true; however, the point is for everyone in the company to be aware of their Culture strengths, their values, and their purpose to be actively involved in caring for it.

Beyond performance, growth, and disaster recovery insurance, a strong Culture is also an strategic means for differentiation that cannot be replicated by a competitor. A strong Culture creates an indelible imprint that is based on emotional connections, on meaningful epic stories, on generosity, and plain happiness that cannot be acquired with cash or replicated by a consulting firm.

Indeed, company Culture is the stuff of priceless reality that makes people recommend your company wholeheartedly to their trusting friends, and that makes people remember you. In a world where all seems fake, where most messages are manipulated, your company Culture and its impact on who you serve could mean the difference between succeeding or not.

Investors that are already privy to the fact that Culture is a key asset could encourage company founders to develop it from the start. As a matter of fact, a recent study published by the Journal of Private Equity, states that one of the key strategies for Venture Capital funds to increase the odds of startup success is by focusing on team building in their portfolio companies. Actually, I would say that it should go beyond just team building, it should be about Culture Building!

Most investors (not you off course) consider their job to be searching for companies, generating viable leads, performing due diligence, and deciding on investing the right amount of capital at the right valuation. The relationship with their portfolio companies after making the investments primarily consists of monitoring.

However, investing in Culture is indeed a numbers game as well, as shown in this image: 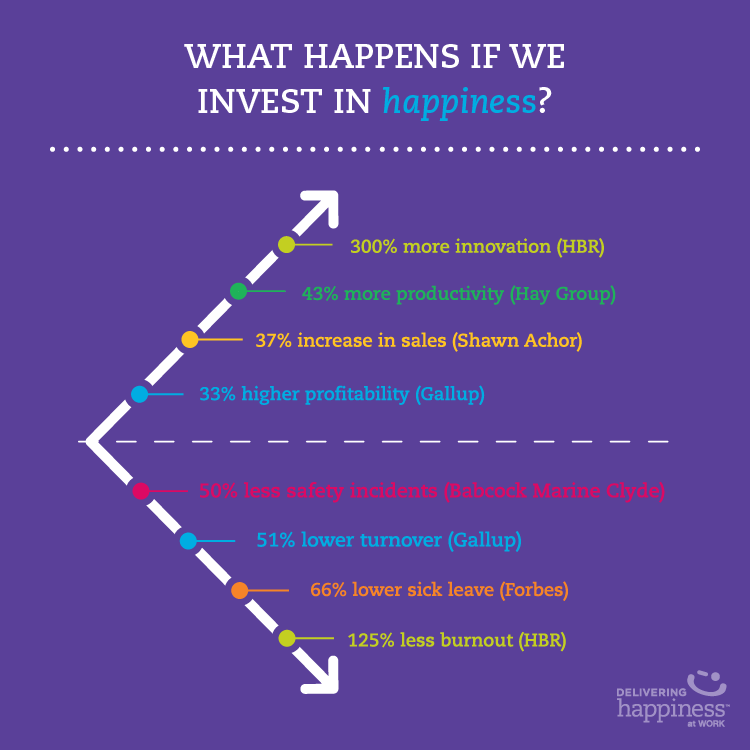 As an investor, when do you want to have these returns?

In 1995, Javier started his first company, a Web design firm in Miami mostly focusing on providing services to small businesses and entrepreneurs. To do his job, he found himself asking questions about the founders, about their purpose, vision, values, products and services. In many occasions, he realized the answers to these questions were not clear. So, he found himself coaching customers on how to clearly define the fundamental aspects of their business. He did it even as he realized it was not supposed to be part the job. However, he enjoyed it tremendously! From these humble beginnings, Javier has built a career out of following his passion… helping people, and building tools to simplify their processes and create greater happiness at work.  You can follow Javier on Twitter @justaction!