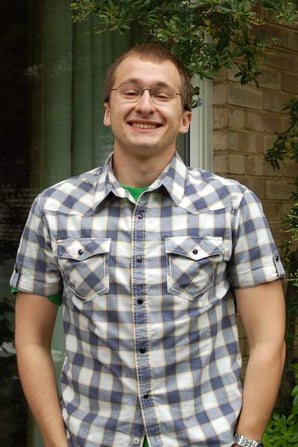 "What can you do professionally that makes a difference socially?" It's the question that prompted one college student and his class to use video for a very special project and purpose.

My name is Vas Blagodarskiy, I am 20 years old, and I study at the University of Maryland. I read Delivering Happiness about 6 months ago, and I loved it. I have my own business, Kinetic Typography LLC. I love changing people's perceptions of ideas via video. As a college student, I know that this is the time to 'find myself.' I wanted to do something creative, and something that could change a small piece of the world. I knew that the sooner I found an artistic outlet that could bring smiles on other people's faces, the sooner I would discover my own happiness. This is the story of my self-discovery.

I wanted to tell you about an enlightening experience that I've had in a class, called "Living a Life of Meaning and Purpose," by Dr. Barbara Jacoby. Professor Jacoby is a proponent of grassroots action. She taught us about the value of reflection and awareness within social change. It's a fancy way of saying, “what can you do professionally that makes a difference socially?” As part of our year-end final grade, we had to do a class-wide service project. I suggested the idea of making a video about a cause, because of my company, and my personal affinity for video and viral ideas. The class liked the idea of making a video for our final service project.

We put it up for a vote and chose to make a video about a classmate's brother.

Kailin Hsu, a fellow student, told us about her brother Jaiwen Hsu's road to recovery from cancer. When he fell ill, he was only five. No one expects cancer to happen to them; I could relate, because even today, I would imagine that most people feel like cancer is something that 'afflicts others, not me.' Yet, Jaiwen was at risk of losing his ability to walk. We wanted to capture that emotion -- the fear of losing your ability to walk as a five year-old child -- and make a 'call to action' to do something about cancer research funding in America. Our call to action (for now) is to go to our website, where we are displaying our final-project video. We want people to feel that "wow" about the story.

I can only imagine what it would feel like to be Jaiwen's brother. I felt the Hsu family's strength through working on the video with Kailin. To me, Jaiwen's story is unique in that I have never gotten to know such a young cancer patient, on a personal level. While we were planning everything out, a fellow student found out about an interesting competition in Washington, DC. It was open to the public. We had to submit a 2 minute video.  If it gets chosen, then it would be shown in front of Congress! We decided it would be best to get Jaiwen's story to go viral. Take a look!

We got over 100 people to share it on Facebook in the first few days after posting it. I felt incredible when I found out that Jaiwen loved what we did! The Hsu family told us that they were very touched. I was moved in the process of reflecting on all of this. I realized that although all we did was make a video, we touched a lot of people's hearts in the process. Jaiwen's doctor enjoyed the clip; so did our social media networks, who had nothing but encouragement for us. Even if we don't get to show this to Congress, I've already discovered a component of my own “life of meaning and purpose,” as is the name of the course. This experience drove the process of delivering happiness a lot closer to home – for myself, for my class, but most importantly, for the Hsu family.