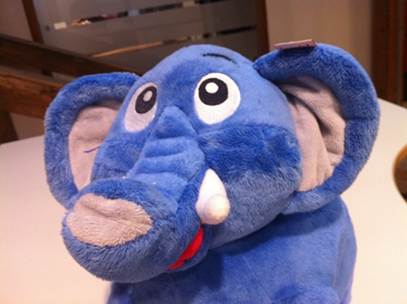 Chief Happiness Officer and consultant Alexander Kjerulf at positivesharing.com put the bloglight on the Danish division of Valtech Software, a company that circulates a stuffed elephant for that which should not be ignored: co-workers who are positive in attitude or action.

Valtech's "Order of the Elephant" award is named after one of Denmark's long-standing and most prestigious honors for its royalty and heads of state.  Historically a symbol of strength and wealth in the country, the elephant is actually also big on happiness. When reconnecting with an absent group member, these mammals have been known to offer a joyous welcome by spinning their bodies, flapping their ears, and trumpeting like there's no tomorrow.

So the next time your co-worker does right by you, consider ordering up an elephant.  And throw in a good old-fashioned ear flap, too.