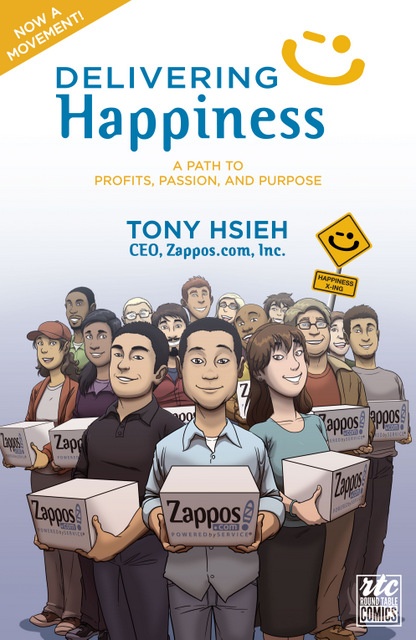 Delivering Happiness and Writers of the Round Table Press are proud to announce the launch of Delivering Happiness, the comic book! In this interview with DH, publisher Corey Michael Blake discusses his reason for creating the DH comic, his creative influences, and why the world of comics might surprise you. You can pre-order the DH comic book (due to publish 3/16) at Amazon.com.

DH: In 2007, you decided to start publishing books. What was your vision for using comics as part of your business model?
Corey Michael Blake: Comic books came on our radar in 2008 when we were working with executive coach and author Bea Fields on a story based business book called Edge. It's a character driven story of a CEO breaking through his creative blocks as a business leader. At that time we recognized the value of pushing the creative envelope when delivering educational or inspiring content for professionals. Around that time, our creative director Nathan Brown was pushing me to get more involved in comics. I loved building creative teams and producing content and this seemed like a natural fit, so we began licensing best-selling business books to repurpose as comics. Our first releases hit the stores in April of 2011 and since then we've released a total of 10 comics with three more hitting the streets in March of this year, including Delivering Happiness, Andy Sernovitz's Word of Mouth Marketing and an adaptation of the U.S. Constitution.

DH: Why did you think Delivering Happiness would be a great comic book?
CMB: I listened to Tony's audio version of Delivering Happiness when it first came out and was so inspired by his journey that I encouraged my staff and business partner to read the book. DH became such a regular part of our creative and culture conversations at Round Table Companies that we knew the idea of a comic version would be a blast.  I reached out to Tony via email and he responded with interest quickly. Both James Key Lim and Jenn Lim jumped into action working with us and Hachette to get the project on its feet.

DH: What are some of the issues you need to address when turning a traditional business book into a successful comic book?
CMB: Our main goal is to create a product that the author and his team are inspired to use. With DH, the scripting was fairly straightforward.  The biggest concern was an illustration style that the DH team felt was in line with the company's mission and message, so finding the right artist was the main imperative. We went after Rob Ten Pas who illustrated Dan Pink's Johnny Bunko and once we settled on him and the character styles we were off to the races. 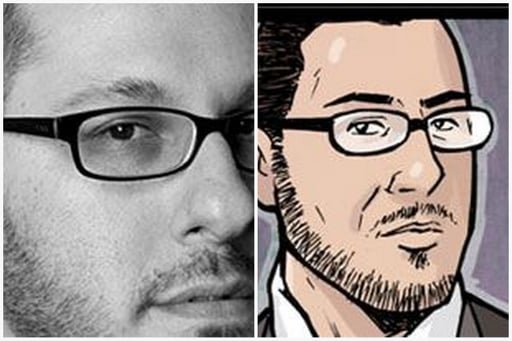 DH: Were you a comic book fan as a kid?
CMB: I was actually a Star Wars and Legos kid. But as a theatre major and then actor turned director and producer in LA, I've always been a huge fan of storytelling and the value of collaboration. When I was making films with our now VP, David Cohen, in LA, nurturing the team and helping them succeed was the priority. So shifting our team building expertise to illustrators and scripters was a natural extension of our skills. David was a comic book fan as a kid, had been a childhood TV actor, and then went on to produce documentary films before transitioning over to RTC, so we share a similar love for storytelling in various creative formats.

DH: What's something people might be surprised to know about comics?
CMB: Comics are not just full of superheroes and used for escapist entertainment. When the comic medium is combined with real world issues and used to inform, educate, and inspire, the results are incredibly powerful tools. We have created comics such as "Mi Barrio" that is used with at risk youth around the country, and "Everything's Okay" that educates families facing childhood illness. We're releasing a free curriculum with our adaptation of The U.S. Constitution to help teachers in the classroom. We expect the comic version of Delivering Happiness to have a similar impact. Happiness in the workplace is a major issue and if we can help push that conversation forward with a creative product, we've achieved our goal. How many adults are too busy to commit 8 hours to the full book, but have an hour to absorb the impact through the comic? Similarly, how many young people aren't excited by a traditional business book, but will learn about Delivering Happiness because the comic appreciates how they prefer to read and learn.

DH: What are some of the creative influences in your life?
CMB: Harold Clurman had a huge impact on me. He founded the Group Theatre in the 1930's and he used the entertaining medium of theatre to address topical and important conversations that Americans were facing in their world. He was the generator who brought together titans of the theatre world like Clifford Odets, Stella Adler, Lee Strasberg, and Elia Kazan. His work led to major hits on broadway and the eventual creation of the film industry. My goal is to follow in his footsteps and continue to build a creative army of talented professionals who understand how to use entertainment responsibly and direct their talents at making a positive difference in the lives of others by furthering important conversations.

DH: What inspires you in your work?
CMB: Truth. The depth and courage I see daily in our clients who have to expose themselves to have an impact. Kindness. A team committed to their own personal growth as much as the growth of our clients. The ability of storytelling to transform authors and change the lives of readers.

DH: What makes you happy?
CMB: My greatest joy is helping people to find their purpose and share it through the book writing process. Our work with first time authors is often transformational. They are looking to pioneer a conversation and have to step into the best version of themselves to do so. When we have a huge part in their discovering the depth of their purpose, there is no greater happiness. That also happens with our staff; they care so much about our client's projects and success that they give their all. That often leaves them positively changed for having been a part of the process and that brings me tremendous happiness as well. As an entrepreneur, I'm always chasing the better system, the better product, and the bigger budgets play with, so I will admit that sometimes happiness "feels" elusive, but I also know I am living a dream. To have an impact and do it creatively and with so many fantastic people is a pretty damned amazing thing.