Putting the Spotlight on Happiness with CineCause 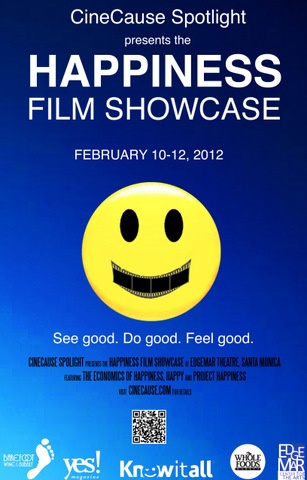 There's a meeting place for film and happiness. It's called CineCause.

CineCause founder and CEO Jon Fitzgerald describes his company as the portal for connecting film and celebrities to socially relevant causes.

Getting its start in early 2011, CineCause has amassed films across numerous categories such as education, the environment, health, war, and human rights.

CineCause's online site allows filmmakers to submit their content which Jon groups by theme. He also devotes some of his time to seeking out promising new films.

Relevant causes are reviewed for transparency before Jon aligns three of them with a given film. Current CineCause celebrities like Matt Damon and Oprah Winfrey may be contacted by Jon or may inquire on their own to lend support.

To create showcases for the films, CineCause hosts "spotlights," often in the context of a film festival, sometimes as a community event that stands on its own.  The spotlights offer an immediate opportunity to make a donation (online or in the theatre) and get involved with the cause.

At San Diego's Film Festival, for example, CineCause hosted a Q&A session with the filmakers following the screenings; the audience could make donations via smart phone.

On February 10 - 12, CineCause will host a Spotlight on Happiness in Santa Monica, California. The decision to select happiness as a theme was "simply the right way to start the new year," says Jon. "It's a topic that everyone cares about." The films being presented are Happy, Project Happiness, and The Economics of Happiness.

Delivering Happiness has donated 100 books for the event to continue spreading and inspiring happiness around the globe while supporting CineCause's journey.

After 20 years of making movies and directing festivals, Jon describes his greater purpose as drawing attention to and attracting positive change. "I can't write big fat checks," he says, "but I can use my marketing and film background to make a difference."

Jon is an entrepreneur and what makes him tick is his family and his ability to create and do new things. He considers film to be a powerful medium for influencing change and says his career has helped him see the importance of living with gratitude. "It doesn't take much to make me happy," he notes, "but it takes a lot to make me unhappy."

Jon believes in sharing his knowledge, whether in the form of contributing to festival strategies or acting as a sounding board for a friend who has an idea for a film. In addition to spearheading CineCause, he's taken films into schools and has created a trilogy of documentaries (The Back 9, The Highest Pass, and Dance of Liberation) covering self transformation.

CineCause will soon be launching a membership program that includes access to quarterly Live chats with filmmakers and a feature film per month. A rewards programs allows subscribers to earn points for sharing movies and clips with friends and for interacting with causes. Prizes for helping make a difference include trips to movie sets and international film festivals.

Check out CineCause and help put happiness in the spotlight.