For this blog post, I shall do something unusual: present wisdom from a classic military handbook, The Art of War, written by the Chinese general Sun Tzu. It’s a book that fascinates me because its concepts about winning battles apply analogously to virtually every human interaction. In addition, there are undertones of other useful principles, namely pacifism, patience, and sound decision-making.

I thought I’d share some lines from Sun Tzu’s work (from the Lionel Giles translation) plus my thoughts on applying them to everyday life:

Accomplishing something is best done through peaceful methods with minimal effort. Fighting to achieve something is just one way, and it’s not always the best.

“The highest form of generalship is to baulk the enemy's plans; the next best is to prevent the junction of the enemy's forces; the next in order is to attack the enemy's army in the field; and the worst policy of all is to besiege walled cities.”

Like stopping an enemy’s plans instead of attacking a walled city, prevention is better than letting a problem get out of control. For example, take care of your health instead of waiting until you’re sick, and follow a budget instead of spending carelessly into debt.

“If you know the enemy and know yourself, you need not fear the result of a hundred battles.” 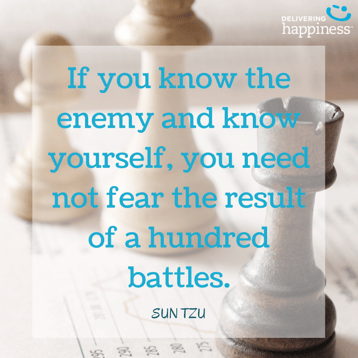 If you know the positive and negatives of what you will encounter and your own strengths and weaknesses, you can confidently handle the situation.

“In war the victorious strategist only seeks battle after the victory has been won, whereas he who is destined to defeat first fights and afterwards looks for victory.”

In life, you can do what you’re doing while hoping for the best. But if you really want success, take it a step further by planning things out so well that you know you will win, even before starting your task.

Do not repeat the tactics which have gained you one victory, but let your methods be regulated by the infinite variety of circumstances."

Sometimes, you must try different methods for ongoing success instead of relying on just one that worked before. This is especially true for business, where new ideas are essential.

“The way is to avoid what is strong and to strike at what is weak.”

Look for the unobvious but easiest way to complete a task, instead of stubbornly doing what is obvious but difficult.

“Soldiers must be treated in the first instance with humanity, but kept under control by means of iron discipline. This is a certain road to victory.”

If, as a group leader, you spoil your followers too much or treat them too harshly, they will not take your lead. When you treat them with respect first, they will gladly do what you ask, including tasks that require serious supervision.

“Anger may in time change to gladness; vexation may be succeeded by content. But a kingdom that has once been destroyed can never come again into being; nor can the dead ever be brought back to life.”

Acting on impulse may lead to destruction that is hard or impossible to reverse. Focus instead on positivity and happiness in everything you do.

Anthony Lee is a prolific writer (medical by day, creative by night), an avid book reader, an enthusiastic movie watcher, and an insightful philosopher. He joined the Delivering Happiness movement in late 2011 after reading Tony Hseih’s book of the same name, sharing it with his book club, and adopting a newfound optimistic perspective on life. He spends much of his time thinking of ways to improve the world and inspiring people with his own words of wisdom and inspiration on Facebook (AnthonyLeePhilosopher) and Twitter (AntPhilosopher).