Wisdom for a Happy Life: Age Really IS Just a Number (Part 2)

My last Delivering Happiness blog post about people who are amazing despite their age was a real pleasure to write. Honestly, I had so much fun doing research to find incredible people that I couldn't limit myself to just three inspiring examples. In case you’re wondering, I actually discovered a total of nine (yes, NINE!) people whose talents are unique given how young or old they are.

With that, here are three more people to inspire you. Stay tuned for my next blog post in which I present the last three individuals who prove that age really is just a number.

Jackson Murphy (born July 28, 1998, in New York, NY) became famous as a preteen movie critic, whose reviews can be found at his website Lights Camera Jackson. Because of his age, the movies that he reviews are limited to those appropriate for his age group (with Motion Picture Association of America content ratings of G, PG, and PG-13). But that has not stopped him from garnering the attention of professional film critics and making guest appearances on television programs such as CBS’s The Early Show and PBS’s Ebert Presents At the Movies.

Many kids collect toys growing up, but only a handful of them continue that hobby (or perhaps, obsession) into adulthood. Rob Foster (birth year unknown) currently has virtually every Star Wars toy ever made, from the original 1977 action figures to the more recent LEGO Star Wars sets. According to an article at Gizmodo, Rob and his girlfriend share a home with enough space to house the 2,000+ Star Wars toys. In fact, she’s actually fine with the idea of living with a man and his toy collection.

Johanna Quaas, the oldest gymnast in the world 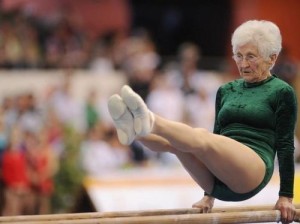 Like many other gymnasts, Johanna Quaas (born November 20, 1925) did gymnastics when she was young. But while other gymnasts would retire after a long career filled with success, accolades, and stardom, Johanna chose to keep doing what she loves. At the 2012 Cottbus World Cup in Cottbus, Germany, Johanna showed the world that she can still be very flexible at the age of 86. The sight was so astonishing that video clips of Johanna’s moves went viral. Now she has the distinction of being the world’s oldest gymnast after being inducted into the Guinness Book of Records on September 13, 2012.