How a Cup of Joe Can Be a Cup of Stress 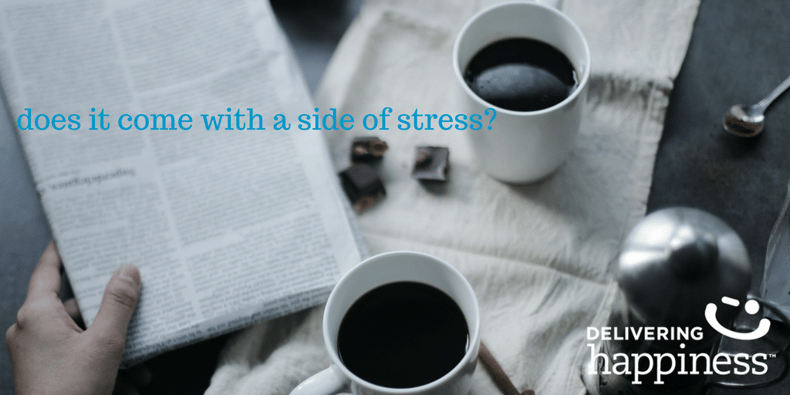 - Even drinking a single cup can cause cortisol to be elevated for hours in some individuals.

- Reducing stress in the workplace may be as simple as eliminating coffee for some people, especially if they are consuming many cups each work day.

Drinking coffee in the morning before work is a fairly common  practice - one that has been normalized and is considered perfectly acceptable. However, it may not be commonly known that drinking even one cup of coffee can elevate cortisol levels to an unhealthy degree. As it relates to the workplace, elevated cortisol - a stress hormone - is associated with agitation and irritability. When it is elevated it can also be associated with aggression. Surely agitation or anxiety and irritability work against being happy and being in these states is not conducive to working well with others.

Cortisol itself is a hormone that is necessary for our bodies to function and is involved in the fight or flight response. It is meant to help us deal with stressful and dangerous situations when it is produced quickly to animate us, but by design is meant to spike for short periods only. When we become stressed for longer periods our cortisol level may be elevated by work circumstances such as looming deadlines, or those that are missed. A manager who yells at employees or co-workers who are verbally negative may help create an atmosphere of stress and anxiety. In such cases elevated cortisol can result which leaves people in a state of distress and even exhaustion.

Paradoxically it is the feeling of being run down that may cause people to reach for coffee, because drinking it produces a feel of energy they lack. However, chemical compounds in coffee called organic acids actually produce even more cortisol. It isn't the caffeine which generates cortisol - even decaffeinated coffee produces it, according to Nicolas Perricone, MD.

Now this information may sound like very bad news to regular coffee drinkers, but it is actually very good news, because working in an office with many different personalities and interpersonal politics combined with having to achieve specific goals can be stressful enough. Reducing or eliminating coffee could go a long way to finding some stress relief during the work week.

Also, when cortisol is elevated for long periods Perricone says it is toxic to brain cells, meaning it causes them to die. Excessive cortisol can also contribute to high blood pressure and reduce immune system function. It might also be linked to depression.

If a hot or warm beverage in the morning is a must, consider decaffeinated green tea because it contains a natural chemical called theanine, which tends to have a calming effect. Green tea apparently has some health benefits, such as reducing stroke risk and severity.

Born as a book, Delivering Happiness is now a culture coachsultancy and a movement on a mission to inspire passion + purpose in workplaces around the world.

Here is how we say "Hello":