How Should You Define Culture? It's Complex.

Workplace culture is becoming a popular topic of conversation.  You’ll see instances where people are very proud of the culture of their company, times where a culture is said to be negative, and even the occasional [though increasingly frequent] guide on how to change it. This is because the culture of an organization plays a major role in determining what that organization can do.

With this being true, it is easy to understand why an organization’s culture is important, and why it is talked about with increasing frequency.  If we want to learn how the culture of an organization comes to be, there is an important way to view it to get at the bigger picture.

Culture is best understood through the lens of complexity.  This means looking at a culture as a ‘system’ that consists of many different ‘parts’ which interact with each other.  This brings with it an understanding that it is not simply the parts within the system [i.e. the people or things within a workplace] that determine how the system works or behaves. It is the relationship between all of these parts within the system that matters and these interactions result in emergent behavior.

A good example of a complex system that we can all relate to is traffic.  It’s not just the cars or just the traffic lights or just the speed limits that affect what the traffic is going to be like on a given day.  There is obviously much more to it, and it would be silly to reduce it down to just these individual parts. 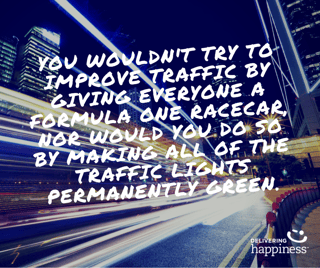 Here are just a few of the things that come into play when thinking about what the behavior of traffic will be like: the quality, width, and number of lanes on the roads; the speed limit; the weather; the number of other cars on the road; the behavior of other drivers; the skills that each driver has; each driver’s current mood and emotional state; a person’s history of driving and previous experiences; where people happen to be going and with what sense of urgency; and on and on…

When it comes to culture, the way everyone and everything interacts is important: interactions between one person and another, between people and processes, between the workplace and external stakeholders, between people and their lives outside of work.  That last point is an important one that often gets neglected: a person’s workplace behavior does not begin and end with what happens between 9 and 5 [or any other time they may deem their schedule to be]. People are affected by what happens to them outside of the workplace, too, and it would be a mistake to assume that upon arriving at work a person can leave behind who they are to become a good worker.  The boundaries we draw around the workplace are helpful for understanding its culture but are not the reality of such an open system.

The way each person acts within the ‘system’ to shape the culture depends on the environment they’re in, on the processes that guide them, on their assumptions, on their history, on the different people around them, their different beliefs, each person’s health, their goals, etc. ad nauseum.

But, with this all being said, and despite the open nature of the ‘workplace system’, cultures [like any system] develop in part within boundaries. There will be boundaries and constraints that impact how the workplace operates. The flow of water in a river depends upon the obstacles it comes across to shape it.  Boundaries [or rules] can be created artificially to some extent, but they also can and should be workable. Behavior forms through trial-and-error, feedback, and learning.  Not allowing boundaries to change based upon learning is an artificial constraint that can stop a better behavior from emerging.

It isn’t possible [thankfully] to completely control the people within your workplace or to dictate how they will behave.  For the most part, groups of people are self-organizing; they organize based upon the confines of their environment and the positive and negative feedback in response to their actions.  Feedback [or a lack of it] is information that affects behavior either by positively reinforcing an action or by negatively reinforcing it.

We learn and change based on our interactions [and the resulting feedback] over time.  Small variations at one stage can lead to huge differences in differing interactions, and feedback and learning are accumulated. Allowing for proper feedback is important.  Allowing opportunities for improvement based on the feedback is even more important, and stopping the natural learning and adaptation that comes from experiencing something can be a harmful practice.

It is difficult to determine a cause or to predict an effect because of the complexity within an organization.  There will be disproportionate effects, unintended consequences, and time delays between when a behavior manifests and when the causal factor first occurred.  Things tend to happen in a nonlinear way, meaning that the result is not often directly proportional to the cause.  In the idiom, “the straw that breaks the camel’s back,” - the cause appears to be a simple straw [though there was much more to it], but the effect is drastic.

Within complex systems, it is common to have time delays - an unaccounted-for difference between when something is done and when any outcome is noticed.  This can lead initially to thinking that an action has done nothing at all, making it difficult to measure progress.

There will also always be side-effects and unintended consequences, whether good or bad.  This is because within such a complex system full of unknown and unknowable interdependencies there will be things affected by any change made which weren't understood to be connected to the change. Because it is nearly impossible to predict cultural change with certainty, understanding some of the factors that influence the behavior of a complex system [such as culture] can provide some insight toward guiding a change. One way to navigate this complexity to influence the development or change of culture might be to make clear the goals and boundaries which guide how people operate, to provide feedback which either reinforces certain behavior or deters it, and to allow for adaptation based upon what’s working and what’s not so that the culture can emerge.

James plays a key role in the development of tracksuit-inc, a fast growing workplace wellness program which is designed to create lasting behavior change for participants both inside and outside of their workplace. He uses systems thinking as a framework for examining the relationships between things to connect dots and understand how various puzzle pieces fit together to form a big picture. Connect with James online @_JamesMurphy and evolvedhuman.com.