Helping Others Leads to Success? 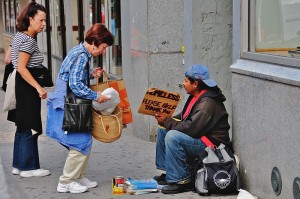 Summary: Prosocial behavior - also known as the desire to help others - may be far more motivating than is currently understood by society at large.

Adam Grant is the youngest tenured professor at the Wharton School of Business. His field is organization psychology and his research sometimes has been on the provocative side. A new book he has written called Give and Take will outline in detail a premise that some may find puzzling: that helping others could make you more productive - and lead to much more success.

Though this idea may sound completely backwards because if you spend a lot of time helping others you might not have enough for finishing your own tasks, it still is intriguing if you consider some of the research.

When he was an undergraduate student at Harvard, his job at a call-center doing phone sales initially didn't mean much to him and his sales were low. When he found out the work could benefit other students who needed the income to pay for their educational programs, he experienced a large surge in dedication and resulting sales. He then approached the sales manager and persuaded him to bring a needy student in to explain how the  sales efforts were helping his education, but this time, the student explained this fact to all the sales staff. One month later, sales revenues had increased 171%. A later study documented even greater growth.

What the sales team had experienced was prosocial motivation - the desire to help others, which caused them to see their jobs in a new light,and bring a different attentiveness and emotional connection to their work.

According to Grant, there are givers, takers and matchers. The first two are probably familiar types to everyone: givers can't seem to stop giving, and takers can't seem to quit taking. Matchers give, but mostly because they want to receive, and they keep score.

Being a giver might actually be associated with a significant level of happiness. However, givers can also get burnt out and perhaps even become bitter if they give so much they don't seem to have much left and are given very little
in return.

10 Essential Qualities for the Future of Work