How Tony Hsieh Is Helping Build A Big New Community

Guest blogger Kim Schaefer describes the makings of the Downtown Project in Las Vegas and how Tony Hsieh has set out to help build a new community.

What is Downtown Project? I’m asked that so often. And it seems like a simple enough question, but it just isn’t.

Our mission statement, while seemingly clear, often leads to more questions. Our goals are so lofty, so enormous, so incredible, sometimes people have a hard time understanding. But, “We are passionate people transforming Downtown Las Vegas into the most community-focused large city in the world.”

And we’re absolutely certain that we can achieve that. We’re privately funded by Tony Hsieh with a budget of $350 million. That budget is set up to fund a number of important community initiatives:

It’s a lot to take in, but it’s important to keep in mind that, while we’re being funded by Tony, he’s not calling all the shots here. Nor are the rest of the Downtown Project team. It’s our hope that our efforts are merely catalysts to help the community here to develop this neighborhood. We believe people are more important than buildings, so we’re spending a lot of time working with community members to discern what they need. We’re working with entrepreneurs who have passion for the business ideas, who are capable, and able to build a sustainable business.

Our goal is to help to create residential density of greater than 100 people per acre and combine that with interesting ground level activities for the people who live and work here. Why 100 people per acre? Well, that idea comes from a great book, Triumph of the City, written by Harvard economist Edward Glaeser. His book has served as a major inspiration for the work we’re doing here. He’s studied cities from different eras and different locales, and one of his findings is that when people live closely together and have lots of opportunities to interact with each other, magic happens.

But then there’s the question of, “why Downtown Las Vegas?” Well, the idea for revitalizing Downtown started with the decision for Zappos to move its headquarters into the former Las Vegas City Hall. I think that’s why some people confuse Downtown Project and Zappos—we’re totally separate and not working to build “ZapposVille.” But the fascination with Downtown started for Tony, for some other Zappos employees, and for me, long before the big move was announced. For Tony and friends, it started with hanging out in some of the local bars in the neighborhood.  When Zappos headquarters relocates in the fall of 2013, there will be 2,000 people who will become part of the neighborhood.

For me, my love of Downtown began in 2008. I’ve lived in Las Vegas since the mid-90s and all of the talk of our city as a transient town with no real community became just talk when I discovered Downtown. Walking down Fremont East is like being in any vibrant, cosmopolitan urban walking city you can imagine. And the shops, bars, and cafes there are all locally-owned. People actually speak to one another on the streets and the more time I spent there, the more it started to become my favorite place to hang out. I got to know people, they became friends, and it all seemed so natural. Spending time in the Arts District, meeting artists and creative people, enriched my life in ways that I hadn’t expected. Downtown just seemed to suit me.

And now, I have the best job in the world. I spend my days writing, thinking, talking about Downtown. I meet with and interview the most incredible, passionate people who are all working individually and collectively to make the city we call home a better place to live. And I get to share their passions and ideas through the stories I write for downtownproject.com.

Something Bigger Than Ourselves

The best part? I’ve actually moved Downtown. My husband, son, and I have traded in our suburban digs for a high-rise apartment. As a family, we’re thrilled to be part of something bigger than ourselves. We’re excited to be able to play whatever small role we can in revitalizing our city and to be here from the beginning. We jokingly call ourselves “pioneers.”

I’ve had some pushback from friends and family who just don’t get what it is we’re doing here. They’ve wondered (aloud) about what kind of place this is for a child to grow up. But I feel confident in my response: it’s the kind of place where my son can grow up around committed, hardworking, creative, smart people who want to change the world. I can’t imagine any environment better for a kid.  And I tell them to stay tuned—a year from now, Downtown Las Vegas will be a totally different place.  Not because of the vision of a few passionate people, but because there are so many amazing people here who believe that there’s nothing more important than community. 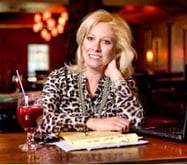 Kim Schaefer is a writer and editor with Downtown Project where she spends her days writing, learning, thinking, talking, and daydreaming about the city she loves. Her work, which tells the story of the remarkable, diverse, and fascinating people who are revitalizing Downtown Las Vegas, can be found on downtowntproject.com. Her writing was previously featured in a variety of publications including Desert Companion, BLVDS, Vegas, and Vegas INC.