Core Values, Culture Inspiration, happiness, wisdom, age, be true to your weird self

Wisdom for a Happy Life: Age Really IS Just a Number 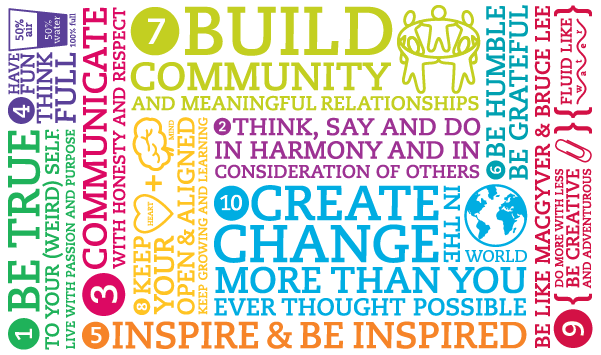 “Be true to your (weird) self. Live with passion and purpose.” – Delivering Happiness Core Value #1

The first of the 10 Delivering Happiness Core Values reminds us of a simple yet often overlooked principle: true happiness comes from being our natural selves. It means devoting our time and energy to doing something we love, something that makes us very happy. When we experience joy from doing what we love to do, that feeling becomes motivation to do that thing well, which in turn has a tremendously positive impact on others. This is true even if we do something that seems weird and out of the ordinary, not following some kind of norm.

One reason that people might be considered weird is that they do something that almost nobody else in their age group would do. They may be older people doing things associated with youth or youngsters acting much older than they really are. Certainly they would stand out as unconventional. But is this necessarily a bad thing? Hardly. If anything, they are unique individuals whose talents are not matched by anyone else. Such people, in my opinion, deserve positive recognition, not negative ridicule.

With that in mind, I decided to Google random search terms related to age and various activities that popped into my head. In doing so, I discovered the following examples of people who do not act their own age, yet are amazing because of it. (Keep in mind that this is only a tiny sample of the many people out there who are talented in spite of their age.)

Here is an amazing example of true compassion at an early age. Hannah Taylor (born in 1996 in Winnipeg, Canada) was only five years old when she witnessed a homeless man eating food out of a garbage can and was deeply saddened by it. Three years later, she founded The Ladybug Foundation Inc., a charity to help the homeless in Canada and elsewhere. Since then, Hannah raised over 2 million dollars for projects to help the homeless, started another charity called The Ladybug Foundation Education Program Inc. to inspire young kids to help their communities, and even authored a children’s book called Ruby’s Hope with a message about caring for other people.

If anybody wants an example of a very prolific author, look no further than Jean MacLeod (born January 20, 1908, in Glasgow, Scotland). The oldest romance novelist in Britain according to The Telegraph, Jean has written over 130 romance novels since 1936. In fact, she celebrated her 101st birthday in 2009 by starting work on her 131st novel. Sadly, Jean passed away on April 20, 2011, in Yorkshire, England, at the age of 103. The same Telegraph article states, “It remains unclear how far she got with novel 131. But she never lost her relish for writing, and for a woman of her age retained an extraordinarily active mind.”

The Nobel Prizes in Physics, Chemistry, Physiology or Medicine, Literature, and Peace have been awarded to great achievers young and old. As of now, the youngest person to ever win any kind of Nobel Prize is William Lawrence Bragg (born March 31, 1890, in South Australia). At the age of 25, he and his father, Sir William Henry Bragg, were awarded the Nobel Prize in Physics in 1915 "for their services in the analysis of crystal structure by means of X-rays." Specifically, their work led to the Bragg law of X-ray diffraction, which is helpful in analysis of crystal structure.

I hope you enjoyed reading about and being inspired by these individuals. They, along with numerous other remarkable people, prove that age really is just a number. There is no such thing as being too young or too old to do something (within reason, of course). The only thing that can stop you from doing something is a lack of drive and determination. No matter what stage of life you’re in, never forget the first Delivering Happiness Core Value. Be true to your (weird) self, and live with passion and purpose!